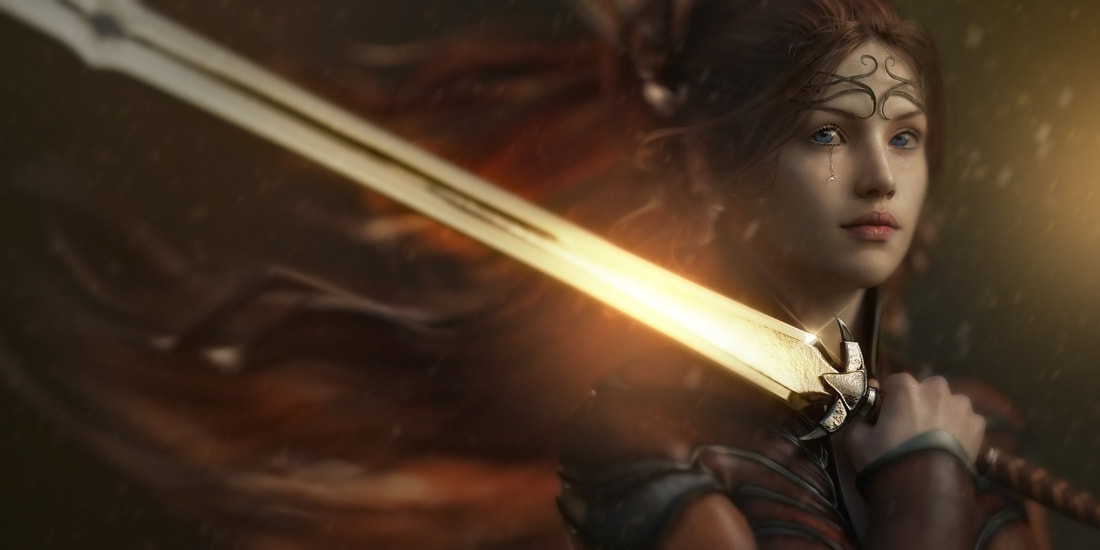 "I Am The Sword" by Rose J. Fairchild

Once upon a time, there was a little girl,
Who battled the monster building her world.
Words were her sword, her body the shield,
But no one else came because monsters aren't real.

Except that they are. They look like you and me.
They hide behind closed doors, destroy hopes and dreams.
Teeth flash in the dark, a hooked hand snakes out
Violating innocence, their carnage abounds.

Wounds to mind and body. Damage to the soul.
This vessel feels broken, but is deceptively whole.
My body's not mine--I learned at a young age,
But it wasn't till it spread that my hurt became rage.

My sibling's bodies savaged; every moment edged in fear...
Tried to sacrifice myself to protect them through the years.
For every time I shielded them, the monster returned,
Until every false safety was shattered and burned.

The only escape was the years that crawled by,
Drowning in sorrow, raging at the sky.
And when I was free, I spread my wings and fled,
Leaving the younger ones drenched in pain and dread.

By then the girl was tired. She wanted to be free,
Of her own hypervigilance and his scrutiny.
She forgot she was protector...that she was sword and shield,
For the siblings still facing the monster's battlefield.

She'd return sometimes, and find it still the same,
Then give them hugs for strength, but quickly run away.
When she woke a few years later, she knew she'd let them down.
Her freedom's cost was higher than any diamond crown.

They've gracefully forgiven me, but can I do the same?
I hide from the past, and even change my name...
But nothing takes away all we were forced to shoulder,
And it doesn't get easier just because we're older.

The poison still seeps, spreading into our world,
Driving walls between us, its filthy presence curls,
Lapping at our traumas, nipping old hurts,
Raising old ghosts with silence and hurtful words.

But let's keep the secret--maintain our appearance,
Convinced this would protect us, but now I won't hear it.
The only one our silence protects is the monster,
And I refuse to do that shit any longer.

I find it so incredible...
I'm easily forgettable.
So, let my image fade,
My memory decay...

You'll hear my whet-stone sing,
My word-sword sharpening.
My blood drips on the page;
Drops of anxious rage.

A terrifying step,
Painful, stuttered breath,
But I will never cease
Until I've slain this beast.